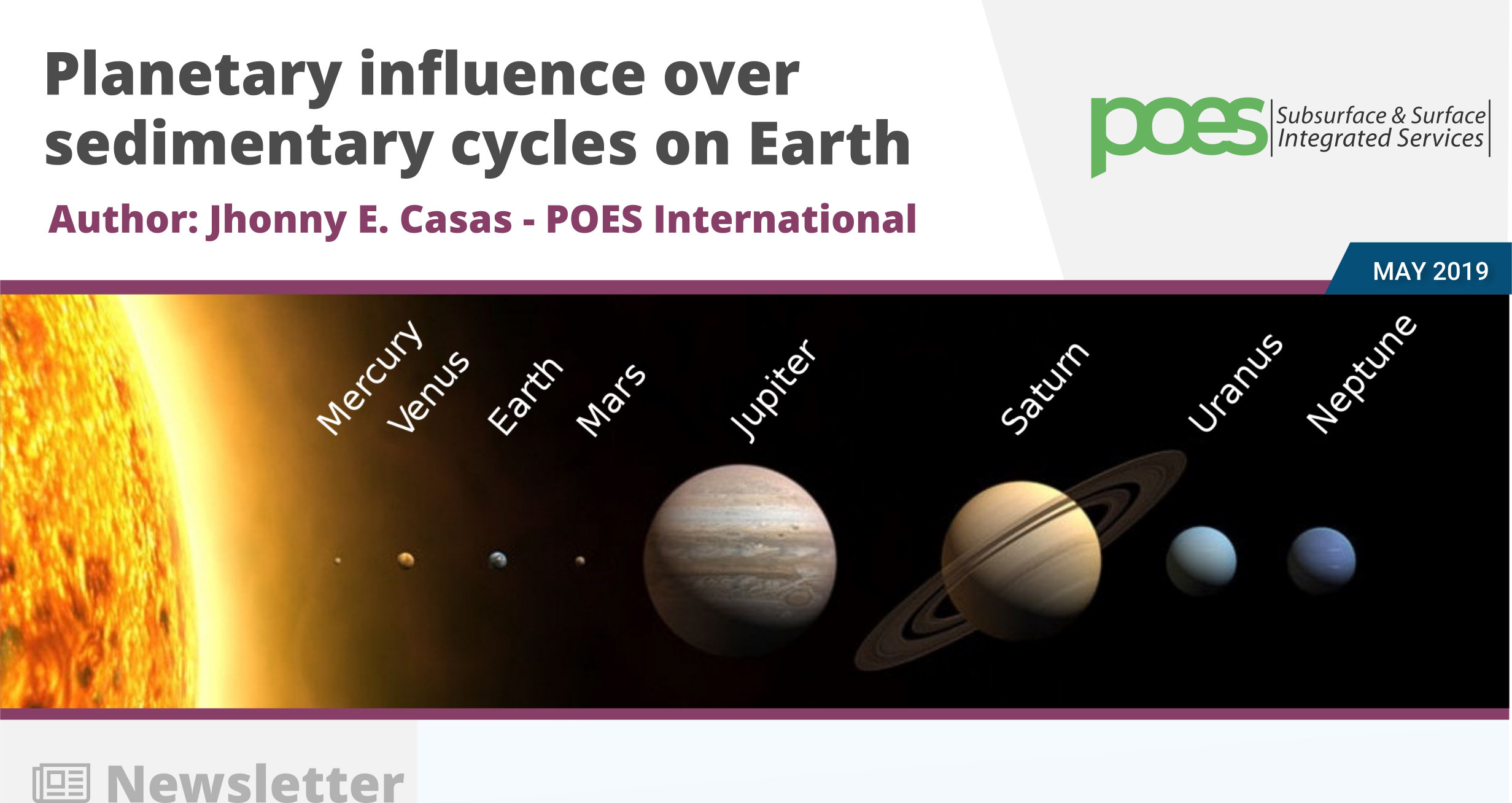 Very interesting studies have been developed during the last two decades about the relationship between sedimentary cycles on earth and the influence of different planets of the solar system. To a first approximation, the orbital planes of the planets are slowly deformed by the gravitational forces of the other celestial bodies in our Solar System, in a quasiperiodic way, that can be decomposed into a series of secular fundamental frequencies, representing roughly each planet’s contribution to the deformation of the orbits (Olsen et al, 2019).

Years ago, Olsen (1986) and Olsen & Kent (1999) described long periods Milankovitch cycles from the Late Triassic and Early Jurassic of eastern North America, and this observed cyclicity, using refined Fourier analysis techniques, was related by those authors, with long term behavior of planets within our solar system.

The same authors studied more than 7,000 meters of core rock with a 30% stratigraphic redundancy to produce about 4,600 meters’ composite section of continuous cores from a continental sedimentary environment (lacustrine to fluvial), of Late Triassic-Early Jurassic (200-227 My), located in the Newark Rift Basin, North America (Figure 1). The stratigraphic study defined a very clear cyclicity, that can be characterized by facies classification or depth ranks, as a measure of lake depths, based on a classification of water-depth-related sedimentary facies suitable for statistical analysis. The cyclicity is also evident in the color of the strata which reflects redox conditions of the sediments and other physical lithological characteristics.

The fundamental lithofacies variation is called the Van Houten cycle, which is recognized on a stratigraphic scale of 3 to 6 m in the cores (Figure 2). This cycle was confirmed by Olsen (1986) and Olsen & Kent (1996) to correspond to lake level variations (due to climate) at a precessional periodicity of 20 ky, close to today’s 21 ky average period because of recession of the Moon (Kent et al, 2017).

In a more recent study published in the Proceedings of the National Academy of Science, Olsen et al (2019) argue that astronomical cycles of the planets definitely can be measured in sedimentary rock from our planet. Cores extracted from the subsurface, covering thousands of meters and spanning millions of years, contain traces of the influence of other planets’ gravity, allowing scientists to estimate the historical positions of planets hundreds of millions of years ago.

Today we know that a sedimentary section may contain the record of past climates, and those climates were influenced by celestial movements called Milankovitch cycles. The Earth’s rotation around its axis, and the revolution around the Sun, evolve over time due to gravitational interactions with other planets in the solar system, which influence Earth’s trajectory around the Sun, including the shape of its elliptical path (eccentricity), as well as the tilt (obliquity) and wobbling (precession) of our planet axis.

In Olsen et al (2019) the authors also include the analysis of other geological expressions (natural radioactivity, rock density and sonic velocity) of these cycles in the same basin. Geophysical measurements of the core holes point out that synthetic seismic traces generated from borehole data exhibit the same big cyclicity. When tied deep exploratory borehole records from the Newark Rift Basin, to seismic, both the Jupiter–Venus 405 ky and Mars–Earth 1,75 My cycles can be clearly seen as the most coherent components of the seismic profiles across the basin.

Nonetheless, the relationships of the rock record with celestial bodies is going to become a crucial element to understand what control our long-term climate, and all these ideas will contribute to enhance the understanding of the Earth’s climate system and has the potential to help us better understand past, present and future climate behavior.